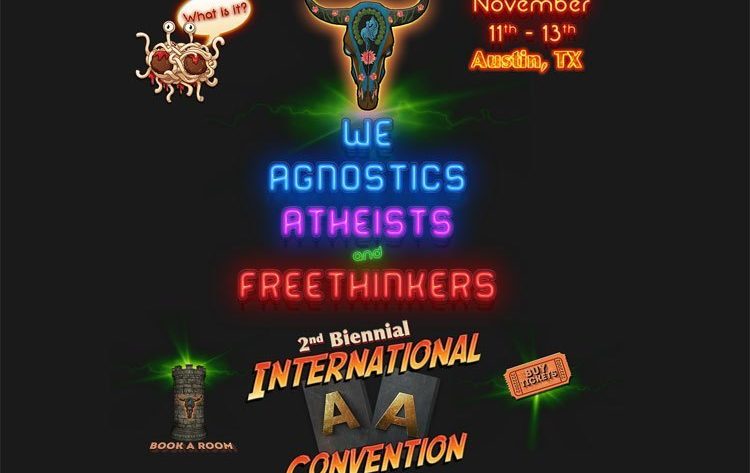 It was very nice to sit down and visit with Dianne P., who is the Chair of the We Agnostics, Atheists and Freethinkers International AA Convention that will be taking place in Austin, Texas from November 11 through November 13 of this year. This is an AA convention that you don’t want to miss. If you can possibly find a way to get to Austin, you should do it, and I am speaking from experience.

I was fortunate enough to attend the first WAAFT IAAC that was held in Santa Monica, California in November of 2014, and it was, without doubt, the best AA convention that I have ever experienced, and I assure you this wasn’t just a pink cloud — that convention was an event that changed my life in ways I never could have imagined. I recorded this podcast and I am posting it on this website because of the people I met at the convention in Santa Monica, and with whom I have stayed in contact and consider among my dearest friends. Nothing in all of my experience in A.A. was as unique and life-changing as the events that took place in Santa Monica, California in November 2014.

The experience didn’t end at the convention. When we returned to our respective homes scattered across the globe, we went to work building an online network to help us stay connected to each other. We created Facebook groups, websites, and online meetings. The Internet made it possible to keep in touch, and bring additional people into our community — and indeed this is exactly what happened. In the months after Santa Monica, people from around the world were starting new secular AA groups; Iceland, Canada, the United States, Japan, Australia — new AA meetings for secular people were forming everywhere. There is real excitement among us to make AA ever more inclusive and never exclusive, and this is what Santa Monica was all about, this is what the keynote speakers stressed — inclusion never exclusion.

WAAFT IAAC is an organization that I love and believe in, as do many in our community. This is the passion of which Dianne spoke during our podcast. She worked hard as Chair to remind the Board to keep principles before personalities, and to always be inclusive, never exclusive. Planning a convention like this is a lot of work, and it requires people to cooperate with one another — often easier said than done.

That alcoholics sometimes have differences of opinion is certainly nothing new for Alcoholics Anonymous. There were fierce debates and arguments among those early AAs who hashed out the Big Book, and as our fellowship grew there were plenty of bumps in the road to happy destiny. So, it’s not surprising that the same would hold true for WAAFT IAAC — there were more than a few potholes strewn along the broad highway.

Roger C. has written an article at AA Agnostica that goes into more detail regarding the disagreements at WAAFT IAAC. Presenting his opinion of what has taken place, he offers some ideas and suggestions for moving forward. It should be noted, however, that neither Dianne nor any of the original Board members were interviewed for that article.

Please don’t let this cause you any concern or the least bit of trepidation about attending the conference in Austin. There was plenty of disagreement prior to the convention in Santa Monica. As Dianne mentioned during our conversation, there were some who were vehemently opposed to the Rev. Ward Ewing speaking in Santa Monica, but at the convention itself – that debate was behind us, and the atmosphere was one of love and service. I am confident that Austin will have the same energy.

There will be a business meeting at the Austin Convention, just as there was in Santa Monica. This will give us the opportunity to create an informed group conscience, discuss any past problems, and to make decisions for future conventions. I urge you to learn more about WAAFT IAAC and to get involved and attend the business meeting. This after all is how movements are created and how history is made.

You simply don’t want to miss this experience, so make sure you attend WAAFT IAAC 2016. You will meet new friends, your imagination will be stirred, you will be inspired to help others, and you will surely grow as a person in recovery.