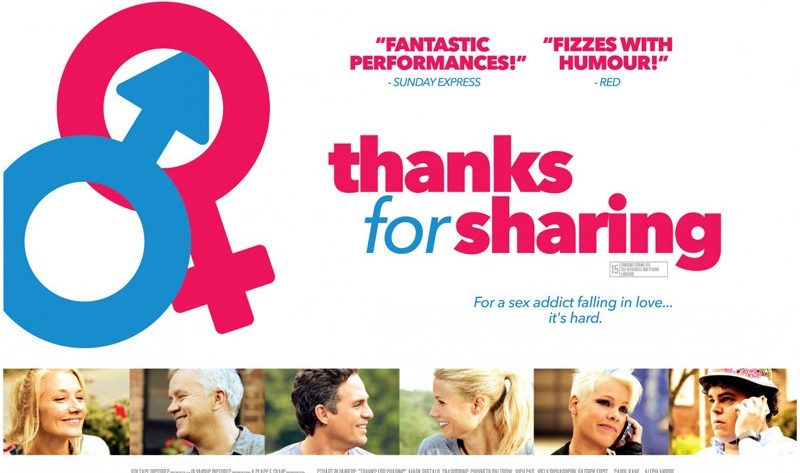 Episode 59: Thanks for Sharing

In this week’s podcast, Benn and I have a conversation inspired by the movie, Thanks for Sharing, a film that describes 12 Step culture through the experiences and relationships of recovering sex addicts. The film was directed by Stuart Bloomberg who also co-wrote the screenplay with Matt Winston and features performances by Mark Ruffalo, Tim Robbins, Gweneth Paltrow, Josh Gad, Joely Richardson, Patrick Fugit, and Alecia Moore (Pink).

Thanks for Sharing does an excellent job depicting the nuances of 12 Step Life, and how those of us in 12 Step programs relate to one another and our families as we come to grips with overcoming our addictions. I highly recommend this movie. As a person in recovery, I could relate to the characters and their struggles. The acting was superb, and the story was well-written and compelling.

The film opens with Adam, played by Mark Ruffalo, beginning his day as we would imagine he begins all of his days—on his knees in prayer. This is followed by a regimented routine and obsessive behaviors that perhaps help to make his life feel more comfortable, maybe even more controlled. We follow him on his way to a meeting where he will celebrate his five-year sobriety anniversary.

Another person on his way to the meeting is Neil, portrayed by Josh Gad. We first meet Neil on the New York subway where he is inappropriately touching and groping a woman passenger. We later learn that he is attending the 12 Step meetings as a way to resolve the legal problems that he’s facing as a result of acting out his compulsive behaviors. At the meetings, he puts on a bit of a show, and he doesn’t seem to be taking any of it too seriously, but when we see him alone in his apartment at night, it’s clear that he is sad, troubled, and in the throes of active addiction.

Adam’s sponsor is Mike, played by Tim Robbins, and he is sort of a guru at his group. I don’t know if Robbins has any real-life experience with 12 Step programs, but he nails this role. He gets it exactly dead-on right. He’s the hard-ass sponsor who dispenses advice with an air of authority to which his sponsees respond in good-humored subservience.

We later learn that Mike’s home life has its challenges. His wife, played by Joely Richardson, is slightly co-dependent, and his son, played by Patrick Fugit, is a recovering addict who much to Mike’s chagrin is staying clean without a program. Mike derisively characterizes his son’s sobriety as “white knuckling it.”

After receiving the go-ahead from his sponsor, Adam is ready for a relationship, and the opportunity presents itself at a party where he meets Phoebe, a character who Gweneth Paltrow capably brings to life. On their first date, Phoebe makes it clear to Adam that she won’t date addicts or alcoholics. She asks him if he is an alcoholic. He pauses uncomfortably and answers “no,” realizing that there is an important part of himself that he is not yet comfortable sharing with someone from outside the program.

The last of the main characters we meet is Dee Dee, played by Pink. She is attending a meeting for sex addicts at the urging of her NA sponsor. She is the only woman at the meeting, and many of the men in the room are noticeably uncomfortable with her presence. Dee Dee befriends the troubled Neil, and although Neil’s motives at the beginning of the relationship are suspect, their friendship is very real, and their evolving relationship is a key storyline in the movie. As I watched their story unfold, it occurred to me that their relationship and support of one another was probably more critical to their sobriety than any of the Step work they may have done. I thought back to some of the friendships I had in AA and how much they helped me as I was learning to live without alcohol. I think the bonds that I formed during that time were just as important and instrumental to my sobriety as was my experience with the Twelve Steps.

This is ultimately a movie about relationships, but it’s not a frivolous romantic comedy. There are several layers of complexity to this film that cause one to stop and think. As a person with many years of experience in Alcoholics Anonymous, this movie gave me pause. I could see myself in each of the characters. It was interesting to see how insulated we are, how we tend to create our own world that isn’t necessarily real. It’s like we’ve built a laboratory where we can experiment and prepare ourselves to mix in the real world— a world full of people who don’t understand, and who sometimes don’t want to understand us. Becoming comfortable in that world is, I think, the real test of our recovery.

As Benn and I discussed the movie, I thought back about how I learned to join the greater world outside of 12 Step culture. I spent the first five years of my recovery safely ensconced in my 12 Step cocoon. All my friends were in the program, and many of the social activities in which I participated were related in some way to AA. As I look back on it, I can’t say it was all bad. I may have needed that time to strengthen my sobriety before I was ready to venture out into the real world. In writing this, I don’t mean to imply that my experience is typical, but I don’t think it’s all that unique either. It seems it was that way for Adam, or maybe I’m projecting my own experience on the character in the movie.

I can certainly relate to Adam at that five-year mark. There he is “Mr. AA,” or in his case, “Mr. SAA.” He’s sober, he goes to meetings, he has a sponsor, he works the Steps, and he sponsors other people. He knows the lingo of the rooms and the acceptance he receives at the meetings help him to feel that all is right with the world. It’s a comfortable place to be, but sometimes we have to experience discomfort to grow, and this is what happened to Adam. I imagine he learned from his experience with Phoebe, but he will more than likely need to feel the sting of disappointment and heartbreak a few more times. That’s just life, regardless of whether or not one is wrapped in the 12 Step cocoon.

The relationship that Mike has with his wife and son is perhaps the most complex of all the relationships depicted in the movie. Mike is a recovering alcoholic and sex addict, sober for 15 years. He loves the program which he credits with saving his life, and when he throws around a slogan, he seems to genuinely believe what he’s saying. In his view, the only real sobriety is that which is earned from working a program. He likes to think that he walks the talk, and by all outward appearances, he does. Anytime an addict reaches out for help, Mike is quick to respond. It’s obvious that the other people in the group admire him, which is a huge boost to his sense of self-esteem. However, one doesn’t need to dig too far beneath the surface to see the selfishness that perhaps Mike himself is unable to see. He’s sober, but he’s deluded.

There is a scene in the movie in which Mike’s wife is unable to find her pain pills, and both she and Mike automatically assume that their son stole the pills. Mike confronts his son, who denies having taken them and he demands that Mike apologize for the accusation. Mike won’t apologize, and a fight breaks out. Later when the pills are found, Mike still won’t say he’s sorry. Mike’s son never hears any amends from his father. It seems that Mike could take the time to care for and listen to the addicts in his group, but he couldn’t do the same for his own family. I sensed from watching the movie that Mike was, for the most part, oblivious to his own callousness, though later there were a few small cracks in his shell.

I loved watching this movie, though it stirred within me some competing thoughts and emotions. On the one hand, I could appreciate the importance of the friendships that we form in 12 Step programs, and how we support one another in our sobriety. The film did an excellent job in portraying what we in AA refer to as “The Fellowship.” On the other hand, it also showed how self-absorbed we can be, and how difficult it is to let others from outside of the program into our lives. There’s definitely a lot going on in this movie, more than can be written about here or discussed in the podcast.

I must say that I enjoyed everything about the film; even the soundtrack is good. Thanks for Sharing is available for purchase or rent at Amazon, Itunes, and YouTube. Hopefully, you can watch the movie and then listen to our podcast. It would be great if you would post your comments here to express your thoughts and share whatever feelings the film stirred within you.

Episode 59: Thanks for Sharing